Cassandra is a complex and full-flavoured beer. Its bitterness derives from both its coffee-like roasted grains as well as its earthy European hop bill and a full-bodiedness achieved through the addition of oyster shells at the end of the boiling process brings out a perceived chocolatey-liquorice sweetness.

The shells are taken from the Siphon restaurant where the oysters have been freshly prepared and consumed by visitors earlier on brew day.

We wanted a beer versatile enough for food pairing in the Siphon restaurant. And we’ve got an Irish brewer who wanted a stout.

Bulk deal
Bulk pricing will be applied to package: 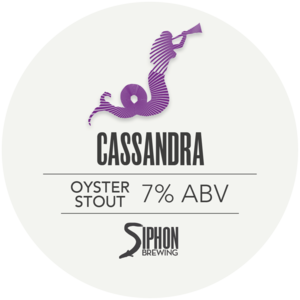